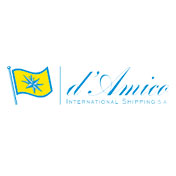 The Board of Directors of d’Amico International Shipping, which operates product tankers, has today (Thursday) announced the approval of the draft of the 2016 full year financial statutory and consolidated results.

Marco Fiori, Chief Executive Officer of d’Amico International Shipping commented: “DIS’ net result was negative for US$ 12.8 million in the full-year 2016, including $6.6 million impairment on ‘assets held for sale’. Such negative result was due to the soft market scenario we experienced in the second half of the year, when rates hit historically low levels. The substantial level of inventories built up in the previous months and in 2015 together with a relatively high influx of newbuildings coming into the market in 2016, put downward pressure on freight rates.

“However, DIS maintains a very positive view on the product tanker market in the medium-term. I am a strong believer that our industry has very strong underlying fundamentals, which will benefit us in the years to come. On the demand side, we are expecting a good level of growth on the back of the trend of refineries moving away from main consuming regions, which will increase ton-mile demand. On the supply side, we have a historically low fleet growth expected over the next two years, with the current MRs orderbook close to its 20 years’ low and very limited ordering activity at the moment. At the same time, the new environmental rules, which are gradually coming in place, will lead to a further reduction on the supply side, benefitting owners of very young fleets like ourselves.

He added: “I am rather satisfied about the way DIS managed to minimise the negative impacts of this market correction. On the one hand, we benefitted from our traditional high level of ‘time charter-out’ coverage (46% of its available vessel days at a daily average fixed rate of $15,214) which provided a good hedge against the spot market volatility; on the other hand, we gradually shrank our short-term ‘time charter-in’ fleet during the year, reducing our market exposure. I think this proves DIS has been implementing a successful chartering strategy and has a flexible cost platform, which we can quickly adapt to changes in market conditions. In addition to the above, we are very active on the sale market. We recently announced the disposal of two of our oldest ships and we are currently working on other similar deals. In most cases, we will charter back for a few years the vessels we intend to sell, positioning ourselves to keep our tonnage capacity in an expected strengthening market whilst increasing at the same time our liquidity and financial flexibility.

Carlos Balestra di Mottola, Chief Financial Officer of d’Amico International Shipping commented: “The product tanker market was rather challenging in the second part of 2016 but thanks to our prudent commercial strategy we managed to limit our loss to $12.8 million or $6.2 million, excluding the impairment we booked on five vessels ‘held for sale’. DIS was able to achieve a FY 2016 EBITDA of $5 million, which represents a 21% margin on TCE Earnings. Such good level of EBITDA, led DIS to generate a positive operating cash flow of $55.7 million during the year.

“At the same time, DIS continued the implementation of its $755 million investment plan in 22 newbuildings, with $151 million invested in 2016, mainly in connection with five new vessels delivered from the yards. The remaining investment plan amounts to $223.4 million and 74% will be financed with bank debt, already fully secured as of today.”

Supply chain safety innovations to be featured at TOC Europe